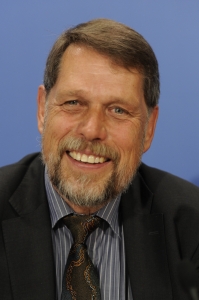 Prof. Mathias Freund has been born in 1949 in northern Germany. He has graduated in medicine at the Eberhard-Karls-University in Tuebingen, Germany in 1974. He has obtained his physician's license, doctorate and his licence as a specialist of Internal Medicine and Hematology/Oncology at the same institution. His research activities in Tuebingen have been focussed on disseminated intravascular coagulation and shock lung, breast cancer, leukemias and non-Hodgkin's lymphomas.

1982 He moved to the Department of Hematology and Oncology at Hannover Medical School. Clinical activities concentrated there on high-grade and low-grade malignant non-Hodgkin's lymphomas, on chronic and acute leukemias. Besides chemotherapeutic approaches a special interest was in the basic and clinical effects of cytokines. Prof. Freund subsequently chaired the Laboratory of Experimental Hematology there. Activities focussed on cell biologic aspects of the growth and differentiation of acute and chronic leukemias and stem cell biology. Clinical and basic developments have been documented in a series of International Symposia on Cytokines in Hematology, Oncology and Immunology in Hannover in 1989, 1991, and 1993. Prof. Freund has been secretary of the annual meeting of the German Society of Hematology and Oncology in Hannover 1989.

From 1994-2012 Prof. Freund has been chairman of the Department of Hematology and Oncology at Rostock University. The development of the department concentrated on high-dose chemotherapy of hematopoietic neoplasias and solid tumors, bone marrow and blood stem cell transplantation and chronic GvHD. Furthermore the department was involved in stem cell therapy for myocardial and vascular regeneration. Prof. Freund has published 333 journal articles, 53 books, and 88 book chapters.

Since 2014 Prof. Freund is chairman of the board of trustees of the German Foundation for Young Adults with Cancer.